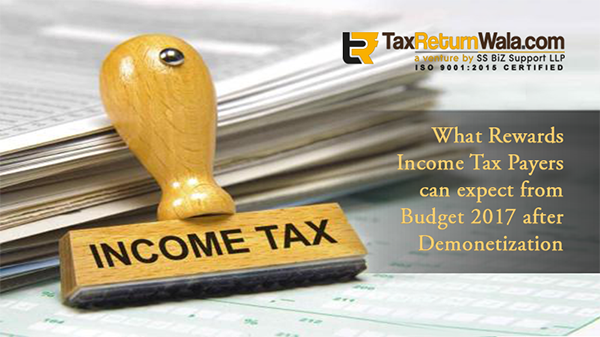 What rewards Income tax payers can expect from budget 2017 after demonetization?

Demonetization has been a strong move recently taken by the Indian government. We have seen both appreciations as well as criticism of the notion. Now the million dollar question that comes to every citizen’s mind is what next? How will it benefit honest Taxpayers?

As per the statement by many government officials, all the money collected will be used for better upliftment of poor as well as infrastructure development. It has also been heard that tax benefits shall be provided to honest tax payers of India. All the black money will strengthen Indian economy by collecting tax from corrupt persons.

Union Budget in India is its complete annual report. It includes all the expenditure and revenue generated by government for a fiscal year. People of India are expecting good news from this year’s Union budget.

There is a strong hope from corporate entities, individuals, and bankers that new Union Budget 2017-18 will announce tax slab revisions. As per the statement our Finance minister Arun Jaitley – demonetization will not only bring back the unaccounted wealth into the economic system, it will also pave way for tax relief to honest taxpayers by bringing the rates down.

There may even be a case for change in the present tax percentage for all bonafide taxpayers of India. There is a rising need to reduction in maximum tax percentage from 30% to somewhere around 25%.

Overall, demonetization will be seen as a future benefit to salaried employees, businessman and other corporate entities. At present we have many options for saving our money from tax deductions like HRA, leave travel allowance, medical allowance, children education and lot more. We can definitely expect a lot more schemes and options for tax reduction in coming days.

Let’s hope for the best and trust in our government decisions. Overall impact of demonetization can be summarized only in the long run. As of now, we can wait for the Union budget FY 2017-18 to be announced by government. We will keep you updated on all the major news and further steps taken by government on any financial matters. Do visit our website for regular updates.