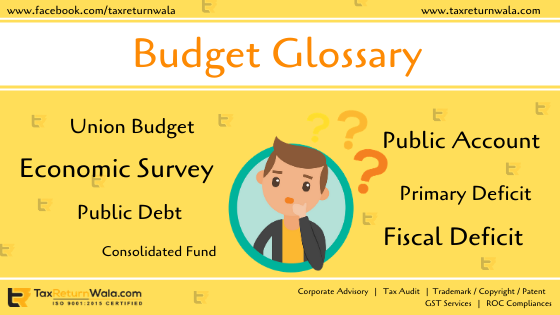 The Budget 2020, is going to be announced on 1st February 2020 at 11 A.M. by the Union Finance Minister, Nirmala Sitharaman. This is her second Union Budget to be presented in the Parliament. Budget is the most important statutory document which specifies the performance status of different sectors of the last fiscal year and the schemes or policies to be incorporated or the proposals to be incorporated in the coming fiscal year in the economy for the upliftment of weak sectors, to give continuous support for growth.

A Budget is prepared with consultation of all ministries and member groups of Cabinet based on the economic survey of the country. An Economic Survey is a documented report of the Finance Minister placed ahead of the Budget release, specifying the health report of the economy.

If you didn’t understand what all these terms Budget, Economic Survey, Government expenditures, etc mean, this post will give you a good dose of understanding for them all.

Union budget is a document of Central Government issued before the common public by the Finance Minister of India through Parliament, to reveal the estimated government expenditures and receipts in the coming financial year.

It is not merely a statement of expenditures or receipts of government, rather it also considers the problems hampering the growth of different sectors in the economy, the changes or new policies schemes to be introduced and allocation of financial resources of government in affairs of economy.

Economic Survey is an annual documented report placed by the Finance Minister, a day before the announcement of Union Budget. With all estimated figures and facts, the report states about performance status as well as well being of different sectors of the economy.

It measures the overall developments, successes, and failures of past initiatives, trends of agricultural, infrastructure, production, employment, money supply, growth, price, exports, foreign exchange, trade, and other relevant economic factors. Based on the economic survey policy incentives, programs and allocation of government funds are planned in the Union Budget.

Article 112 of the Constitution of India prescribes for preparation and presentation of an annual financial statement in simple terms the Budget, by the President before the Parliament.

Prescribed under Article 112 of the Constitution of India, an annual financial statement (Union Budget) is to be prepared and be presented before the Parliament. The Statement consists of three funds –  Consolidated fund, Contingency fund, and Public account. For each fund estimated expenditures and receipts have to be recorded in the Annual financial statement.

All funds raised, granted, received and utilized by the government of India, is done through the Consolidated Fund. The fund restricts the flow of funds until the approval of Parliament is received.

The fund includes an investment of funds by the common public, they have to be managed by the government and paid back at some time to their owners. Any expenditure made through this fund requires the approval of Parliament.

A document presented before the Parliament, for the inclusion of new tax rules, proposed changes in tax structure or changes to be made in current tax rules for any respective financial year.

Public debt is sum total of all borrowings of the Union Government by way of market loans, issue of special bearer bonds, issue of other securities and loans taken by Reserve Bank of India. In short, excess of the difference of public borrowings to public expenditures /disbursal is Public Debt.

Plan your taxes for 2020 with Taxreturnwala.com