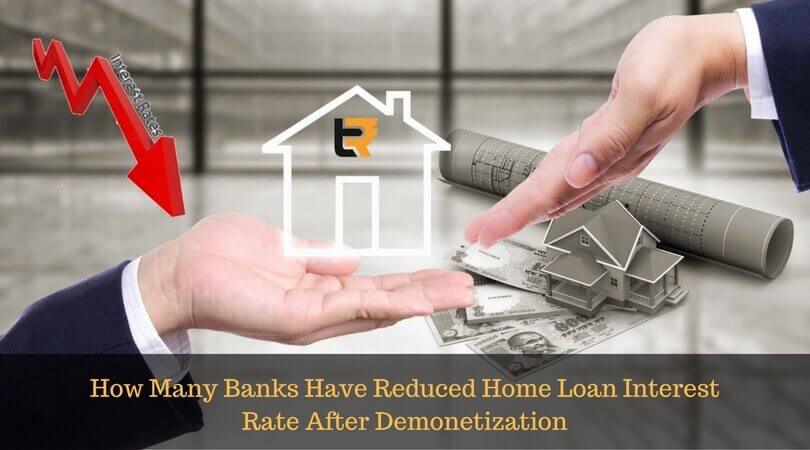 How Many Banks Have Reduced Home Loan Interest Rate After Demonetization

Home Loan Interest Rate After Demonetization – RBI Governor recently circulated his unchanged yardstick for the repurchase rate to be saved at 5.75% and the repo rate at 6.25%(Dated 9.Feb.2016 notification).He detailed this step to be a declining measure for high inflation risk status that is expected to effect growth rate of economy .While the decision sided to economy benefit point, it has a depressing outcome on loan business of banking sector.

Home loan accounts for a big share banking business, interest earned from such lending’s space a huge gap to bank profits. However, being a government controlled business; it is continuously affected by changing govt monetary and fiscal policies. Alike previous year (FY16) major alterations were seen to banking policies, including the applicability of MCLR rate (w.e.f 1 April 2016) and effecting policy of demonetization which somewhat bought some opportunities and some disappointments to bank dealings.

Earlier, banks were notified with a basic rate by RBI to decide their home loan interest rates having a nil effect of repo rate. Banks were subjected to be limiting their loan earnings by such rate.

W.e.f from 1st April 2016 RBI guided banks to use MCLR (Marginal Cost Of Funds Based Lending Rates) as a determinant in their interest calculations, which will not only help the borrowers to get benefited by changing RR, CRR SLR rates and lowered installments but will also help the banks to get some liberty in their loan earnings.

While, MCLR should not to be confused with PLR as PLR (Prime leading rate) is a computed rate which is determined by RBI especially for Non-banking housing and finance companies for bench-marking their interest calculations on loans provided for housing needs.

Also Read: How Can You Save a Huge Amount Of Tax by Taking a Home Loan?

According to financial experts, PM step to ban old currency notes was a necessity for uplifting various sectors. It will not only curb black money but will also become a requisite to minimize inflation rates.

During the period, when public was hurrying to deposit funds, banks enjoyed the benefit of decision in terms of increasing liquidity. But good fortunes are never stable, disappointing banks and borrower aspirations RBI governor gave no further changes to the standing repo rate and argued that present financial health of banks is good enough that they could lower down their interest rates and give some relief’s to their new borrowers.

SBI being first in queue decided to made up the required interest rates; For women buyers they offered rate of 8.6% while 8.7% for others as compared with base rate of 8.9% to last quarter.(No processing fees upto 31 mar 2017)

HDFC presented 8.65% for women and 8.7% to other borrowers lowering from 16.15 % standing in competition with SBI interest cut. (adding further processing fees of 1.25% or Rs 3000 whichever is higher)

ICICI lowered the proposition to 8.65% for women and 8.8% for others, but made it somewhat expensive in terms of surcharge and processing fees.

Being controlled by the oligopoly situation, a major downfall has been noticed in home loan interest rate changes of other banks also, while some banking companies are still looking for some other policy changes of spreading their home business.